Since 21 November, bitcoin has started a rapid fall, losing 1500 USD in price and declining to the level of 6500 USD. The situation has been repeatedly commented by analysts and crypto experts, who have predicted such a decline due to emerging news, as well as the general bearish trend, which has been going on since late October.

During the downfall, the analysts divided over what is coming next for the first cryptocurrency: some of them predicted the further decline, while others were confident in a near reversal. The latter’s assumptions, based on technical and fundamental analysis, turned out to be correct: bitcoin began to recover on 25 November. 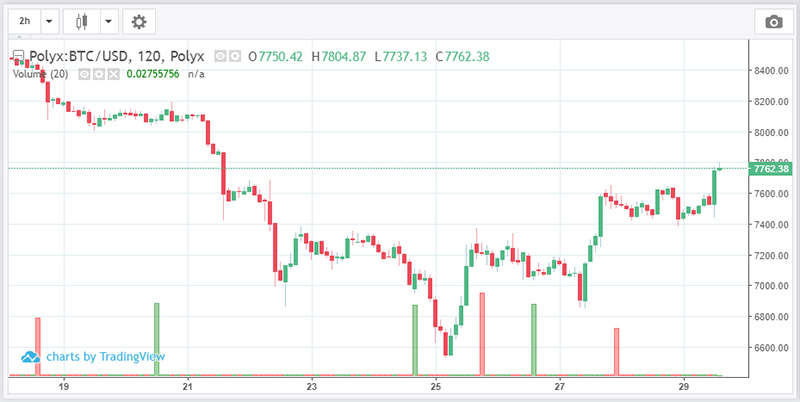 Reasons for the fall

Analysts consider a number of factors for the price fall:

Also, one of the mentioned reasons was the growth of return on traditional assets with their low volatility.

The beginning of the bullish trend

Since 25 November, traders have been noticing a clear bull’s flag. A ‘head and shoulders’ reversal model was formed, which should result in a breakthrough. There was a rebound from the moving average. At the same time, Bitcoin’s capitalization increased, and the capitalization of the entire crypto market once again exceeded $200 billion.

The reason could be the increased demand with a gradually fading panic. Investors, who realised and analysed the situation, recalled that this was not the first case of the negative influence of Chinese authorities on the cryptocurrency market.

Despite the growth, it is impossible to give a precise description of the current events on the crypto market, as well as to determine whether the growth is a new trend or just a short-term correction after the fall.

There are still obscure predictions, especially given the negative news background. The main news is the hacking of the UPbit exchange (this is the seventh crypto exchange hack in 2019). Peter Brandt and Tone Vays expect the start of the crypto winter, assuming the price decline and renewal of lows. Alex Krüger has shared information about the entry of large sellers into the market.

The analysis shows a significant overbought. Jeffrey Halley notes that steady growth can happen only when the appeal of traditional assets is reduced (increased volatility, deterioration of trade relations between China and the United States). A strong resistance at the level of 8000–9000 USD is also expected.

Even more experts support the opinion about the further bullish trend, providing such arguments as the approaching halving, always accompanied by the growth of bitcoin. Analysts also pay attention to the inverted pattern of ‘head and shoulders.’ According to optimistic predictions, the first cryptocurrency’s price may soon increase up to 10,000 USD.