Compared to the stock market, the cryptocurrency market has higher volatility and strongly pronounced bullish and bearish stages. Even institutional investors can’t comprehend this at all times. It’s way easier to understand how to act when prices grow rather than figure out tactics for when they slump. That’s why we advise you to read and remember what you should do and what you should avoid. 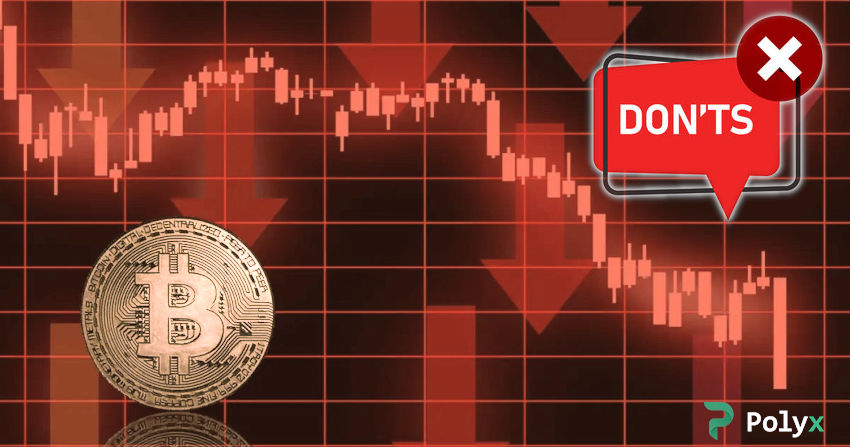 What not to do

When the price of bitcoin drops, some investors’ actions lead to deterioration in their financial situation. Here are the mistakes of those who are just starting with trading or medium-term investing in bitcoin.

Don’t try to find the ‘bottom’

When the price of BTC drops, there are only two ways: to sell it at the very beginning of this trend or to hold it till the end. The main thing to remember: don’t try to identify the ‘bottom.’ It’s almost impossible to accomplish, even with solid experience behind your back.

If you have available funds, it’s better to buy more coins with each significant drop in its price. Where some sell at a loss, others buy at a discount. The price might drop even further, but this doesn’t mean you need to blame yourself for the wrong choice. The only thing left is the contrary — to wait for a reversal and be happy about this ‘sell-off.’

Long-term investors earn more with this tactic. They understand that the crisis will be over sooner than it seems. In a year or earlier, they will be able to sell BTC for more than what they have originally paid.

At the same time, if you always wait for the ‘bottom,’ you might miss the ‘sell-off’ altogether. Sooner or later, the trend will reverse, so you need to keep up with it to earn more than initially planned.

There can be a temptation to run after another fleeting success when the endeavour was clearly a failure. Inadequate perception of the situation is reflected in the desire of investors to get rid of BTC and buy some altcoin that is on the rise right at that moment.

The issue is the late analysis. The growth of an attractive altcoin is behind, so it will no longer be possible to buy it cheaply. This means that in the coming days the trend might change, leading to a tiny profit, if not to a loss.

The saddest thing at this time is to observe the growth of BTC and crypto portfolios of those who haven’t given up the major coin because of a rash decision. Maintaining the original tactics always pays off, especially over a long distance.

The haste redistribution of a crypto portfolio occurs due to the effect of FOMO — the fear of missing out. It’s enviable to watch the holders of a little-known but fast-growing altcoin. It’s really tempting to join them, but this can lead to self-deception.

Don’t monitor the charts around the clock

This is acceptable only when there are no clear tactics. This is not an investment then but gambling — when a market participant tries to seise their luck by earning a few percent of ‘passive income.’

The cryptocurrency market can’t guarantee multiple profits in a short time. But it rewards those who use their mind and abilities by studying trends in certain time frames. Such traders can sleep soundly because they have already opened both buy and sell orders. The rest is just technicality. As soon as the order is executed, they will receive a notification that will take them to the next stage of earnings. This is passive income. 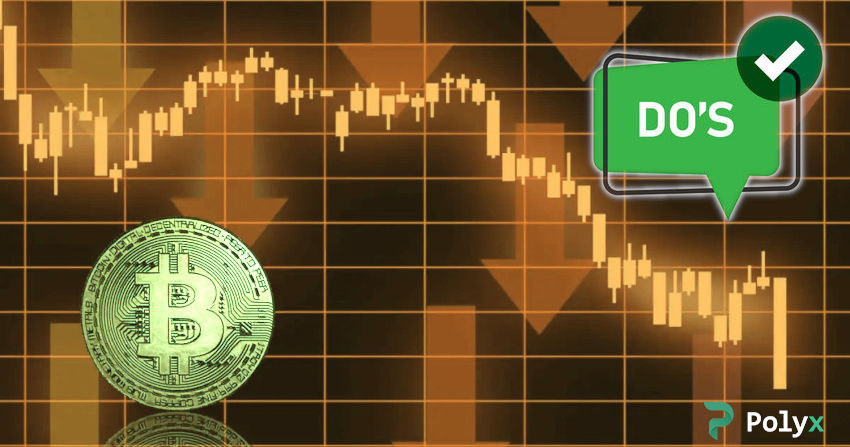 It’s very easy to talk about what not to do. It’s much more difficult to highlight useful tips for profitable trading in a volatile market without guarantees. And yet there are fundamental rules to know and follow.

Hold bitcoin when the trend changes

At the beginning of the crypto industry, when the first investors bought dozens of bitcoins for 1 USD, there were incidents with the exchange of huge amounts of coins for goods or services. The most high-profile case was two pizzas that Laszlo Hanyecz bought for 10,000 BTC in May 2010.

Today, the bitcoins spent on pizza are worth $295 million. But then Hanyecz believed that he had successfully got rid of the coins that were falling in price. If he had held them until the first crypto boom in December 2017, he probably would have been able to acquire all Papa John’s pizza places in his home state of Florida.

So if you have bought assets hoping for growth, but a price drop has happened, wait out the downtrend by holding onto them. The ‘buy and hold’ strategy ensures maximum returns, especially for long-term investors. Such opinion leaders as Joel Greenblatt, Peter Lynch, and even crypto sceptic Warren Buffett are all for it.

The lack of guarantees in the cryptocurrency market should serve as a reminder that even the most optimistic predictions may not come true. If you bought bitcoin for 35,000 USD at the end of January, then it was worth selling it in late March for 47,000 USD without waiting for it to break last year’s record.

Sometimes, you will have to fix even a negative result. A false analysis might make you buy BTC at inflated prices in this time frame. Then, it’s better to timely sell the cryptocurrency and lose a maximum of 10-15%. Later you will get a chance to buy for a lower price and earn back your money when the trend changes.

Buy if everyone panics

The more often they talk about the soon-to-come collapse of the cryptocurrency market, and the more investors act hastily, the faster you need to prepare to buy more BTC. When market participants panic, they try to save ‘real money’ by selling assets very cheaply.

Treat panic as an opportunity but with caution and a full understanding of the situation. After all, one day some prerequisites might really turn into a collapse, which is impossible to predict in advance.

The cyclical nature of the crypto market

The cryptocurrency market is cyclical and volatile. These are the required features for a constant change in trends. Due to them, one year the price of bitcoin drops, while next year it sets a new record.

Try to wait out the bearish phase away from price news and technical analysis, especially if you are not an intraday trader. Work on your tactics with a cool head — don’t let emotions strip you of a chance to profit.