Ethereum and Ethereum Classic are cryptocurrencies with the same history, but different development paths and perspectives. The project, which got split into two branches, stays interesting to investors and enthusiasts even 7 years after its launch. So let’s look at them in detail. 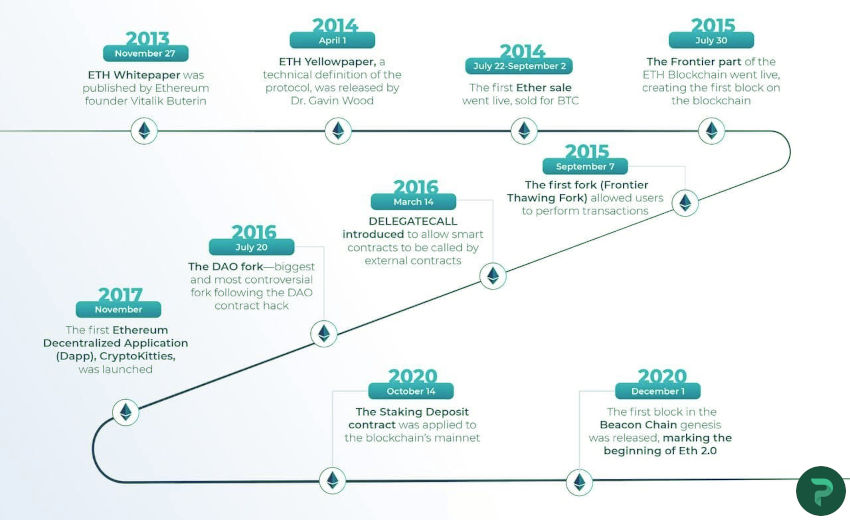 The history of Ethereum

In 2013, Vitalik Buterin, the founder and chief developer of Ethereum, decided to create a new programming language. He proposed his idea to the Bitcoin team but didn’t come across any interest on their part.

Not wishing to stop there, Buterin began to develop his own project — Ethereum. He wrote a white paper, recruited like-minded people, and organised crowdsourcing. A native token presale began in July 2014, and by September the team had raised $18 million in bitcoins. In return, they allocated 60 million ethers and began developing their own blockchain.

The full launch of Ethereum only took place in July 2015. The main difference between the new blockchain and Bitcoin is smart contracts. These are digital agreements negotiated directly by the participants. Smart contracts have conditions written that are then fulfilled automatically and verified without intermediaries.

One of the most important smart contract-based products of Ethereum is The DAO, the decentralized autonomous organisation. It appeared in April 2016. This is a crowdfunding platform with self-management, that is, without the involvement of the central office.

Developers who needed investment to launch a new crypto project turned to Ethereum representatives for approval to publish in The DAO. Further, holders of tokens of the same name held a vote.

A 20% vote in favour of a startup was enough for the developers to receive funding in tokens, which the investor holders sent to The DAO. The platform seemed quite transparent and flexible to investors, so they tried to invest as much as possible in emerging crypto projects.

The first users of The DAO quickly discovered its security problem and pointed it out to the developers. They assured that the situation won’t lead to negative consequences. However, they were mistaken.

In June 2016, attackers hacked into The DAO. They took advantage of a known problem and were able to withdraw a third of the ethers invested in the platform. At the time, this damage was estimated at about $50 million.

The weak point was in The DAO exit procedure. To do this, investors sent a request, after which a two-step split took place:

The hackers applied a recursive function, performing the split in this way:

Pretty soon the hack was noticed. Without delay, decisions had to be made on how to return the funds to the rightful owners. The ‘28-day rule’ was helpful in this, so that attackers couldn’t gain access to the remaining 2/3 of the ill-gotten ethers. 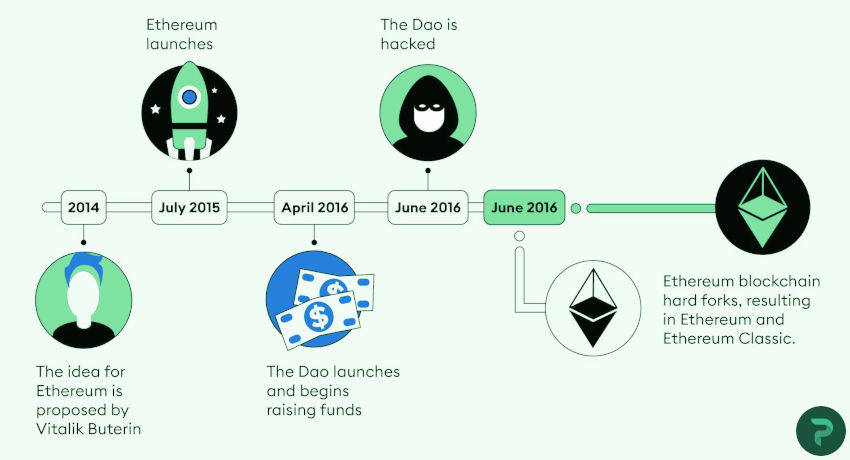 The discussion of the situation split the development team. One group said they would be able to revert the code to the moment before the hacking took place, in order to recover the stolen cryptocurrency. The other group wanted to act more radically and rewrite the code, correcting the critical error. As a result, the majority decided to arrange a hard fork.

The old project was renamed to Ethereum Classic, and its coin received the ticker ETC. In fact, it was the same Ethereum, but with an added word, emphasising the commitment to the first version of the source code and its immutability. The record of the attack remained in the registry of the classic branch forever.

The new project took its original name and the ticker ETH, as well as most of the developers, including Vitalik Buterin. A lot of upgrades helped to get rid of weaknesses, which made the cryptocurrency more attractive in the eyes of investors. This is evident in the current capitalization and price.

There are few differences between the attributes of the cryptocurrencies, since they have long existed on the basis of a single blockchain:

While Ethereum developers have already released over 15 updates, the Classic project team sticks to the traditional code.

Ethereum looks like a more confident participant in the cryptocurrency market when it comes to its prospects. This argument has a number of evidences:

The prospects of Ethereum are clear — constant development, new areas, expanding the boundaries of the cryptocurrency industry. But for Ethereum Classic, everything is less transparent, as recent updates were made for better compatibility of the two blockchains, and not for its own improvement.

The Summary of Ethereum: What’s So Great About This Blockchain Platform

Ethereum: The Beginning of the Smart Revolution and a New Blog Section